Chris Russell performed solo as the first act for the night, so of course there were giggles when he introduced his band on stage. There was however, no need for a band with enough roar in that guitar and blues in that voice from one. Making the most of all the time available on stage, he even crammed in a last a capella number with hand claps in tow to roaring cheers.

From one, to three with Three Kings on stage. Word had it that these guys were a great act, and they were nothing short of impressive. Super cool, super talented and having a blast on stage while getting the crowd dancing by bringing some raw blues to rock The Corner.

The numbers increased again for the main act, with JD McPherson bringing a four-piece band in tow including Jimmy Sutton who is mesmerising to watch on upright bass. After waiting a couple of years since McPherson and his band last took the stage at The Corner, the guitar and beats of Bossy were the first sounds opening a much welcomed return and punters’ memories were in fine working order singing every note to North Side Girl. 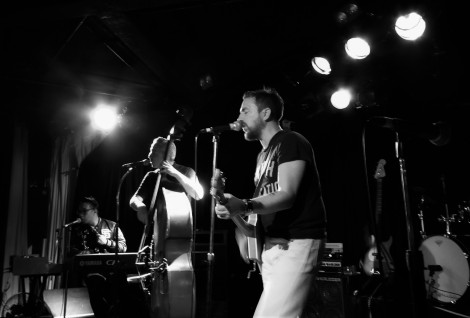 It was all about the rock and roll, rhythm and blues, and rockabilly so let’s safely say that the slower numbers are a necessary inclusion for some well-deserved recovery. As good as they are, nothing beats the faster tunes that puts this band through its paces on stage. Every band member was showcased in opportunities for solos and jams throughout the night, with no shortage of talent and skill on display and musicianship seeming as natural as breathing for these guys.

The new album put the crowd’s rhythmic clapping abilities to the test and Wolf Teeth did the same for a one syllable singalong. Sound wise, Let The Good Times Roll was even better than anticipated on stage, doing a damn fine job in garnering cheers and dancing. It seemed only fair to finish up on Everybody’s Talking ‘Bout the All-American – if the gig didn’t get people talking about this All-American, it’s hard to say what would do the trick.