A quick tour – three shows, three cities an unsurprising sell out at The Corner. Paul Dempsey was gracious and appreciative as ever for the support, but someone from the crowd was spot on when they said, “It’s cause you’re pretty good, Paul.”

There’s never a disappointment with support acts when seeing Paul Dempsey, and on this occasion it was the fine Fraser A. Gorman. I don’t proclaim to be a huge fan, but by golly he’s an absolute delight to have on stage. The self-described Leo Sayer dressed up as Bob Dylan entertained with affable charm, troubadour tunes and banter embracing kebab eating after 3am, people who wash windows on skyscrapers and selecting appropriate songs to sing at weddings. You just can’t help but smile. 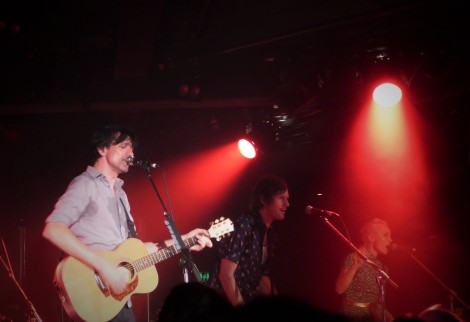 Having already seen the new band line-up* accompanying the solo work last year, a stellar night of tunes was to follow. These were the old faithful fans, cheering in delight at the familiar chords of Bats opening the show, singing along in adoration to the likes of The Great Optimist and lapping up the new material in earnest anticipation of the new album. The awesome harmonies of Idiot Oracle were ear-meltingly good, the ominous sounds opening Blindspot garnered curiosity and the exemplar song writing that everyone has come to know and love left all present hanging on every note and word. Bowie covers have made their way into past shows, and tonight was no exception but there was also a nod to Neil Young with Cinnamon Girl.

The night’s encore not only brought more music, but a special visit from John Hedigan for a couple of tunes – after last year’s Something for John benefit gig, it was a very welcomed presence on stage. With that impending album and the promise of more shows this year, there were a few happy faces around at the end of the night.