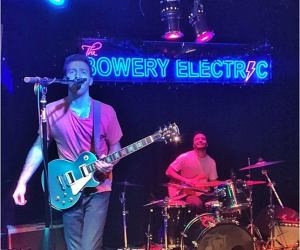 Hearing the term orchestra usually comes with the notions of grandeur and opulence not to mention the sheer number of individuals involved. That usually doesn’t always apply, and there are exceptions to the mighty ensembles like two piece rock and roll band The Charles Warren Orchestra.

By way of history, there have been others involved in the band over the years but the two constants have been the driving force, making the duo approach a bit of a no-brainer. Particularly when they’ve been jamming since they were 11 years old.

Their live approach is pretty simple – bringing as much sound and energy as two people can muster. The recorded effort is pretty solid as well, with a bluesy tribute to good friends like Jim and Jack in Let Me Go Home, Whiskey, proving that good times come with Two Guitars and letting guitars and vocals shine through in Alcatraz Blues.

WHERE TO FIND THE CHARLES WARREN ORCHESTRA