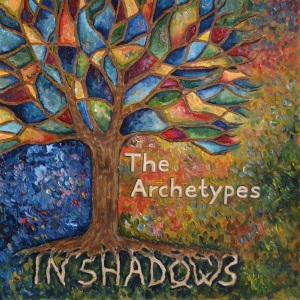 With a line up in place, what’s a band to do? Then comes the music and in the lives of melodic rockers The Archetypes, completing the band line up led to the band releasing its debut EP, In Shadows, in early 2015.

The five piece may be based in North London, but the music has somewhat of a worldly touch, having been mixed in South Africa, in homage to ancestral ties within the band (Theo Crous at Bellville Studios, Cape Town) and mastered in the United States (Gavin Lurssen).

Varied and eclectic influences come to the forefront early on, via a rather easy introduction to The Archetypes via Others, before the pace and intensity increases with a little more rock fury in Copper Penny. The selection of In Shadows as the EP’s title does seem completely justified though, definitely the stand out track and the one that encapsulates everything the band says it does – a mix of lush sounds and rhythms melding for dense melodic rock and soaring vocals. Morning Rain dishes out a little more exposed vocal focus at a much slower pace and doesn’t disappoint either, building into an impressive finish.

WHERE TO FIND THE ARCHETYPES