Returning with new tunes, and a few shows to share the Anchor EP there was another date in the diary to see Birds of Tokyo live – a long-awaited return after what seemed to be an ever-present run of shows and airplay not that long ago.

Gauging from the initial lackluster reaction to Ecca Vandal, it seemed that there was a little confusion in the air. Going in somewhat blind, knowing only one of the previous tracks (Battle Royal) it was a new listen. It took a little while for those present to warm up to this one, perhaps a little left of field sound wise here. Deciphering whether this is a solo venture or a band is a bit unclear – but not giving kudos to the three other band members onstage at any point during the set is a downside here, surely the sound was a team effort here.

It was only right that the new EP would be championed on the night, and rightly the night’s set opened with Weight of the World. A far more synth based sound than before, but certainly not at the expense of older material – An Ode to Death was the first reminder of what we’d been missing live all this time.

The newer sound wasn’t just reserved for the new tracks, with everything on the night being arranged to incorporate just a little more synth than they had before. The newer direction isn’t a bad thing – but it’s a bit of an adjustment, and certainly not a replacement to the guitars and amps being present. 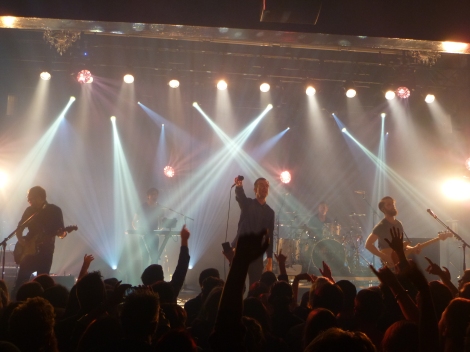 So it may have been a while, but memory is a beautiful thing especially when lyrics are recalled as freshly as they were, shouted reverently from the crowd, and the older the better it seemed. Let’s just assume that the newer stuff is still being committed to crowd memory (for the next show, of course…). But really, something like Puzzle is worthy of just listening considering the falsetto chops on display.

The line “I don’t think we’ve done this before” is crowd code for whipping out mobile phones and hitting the record button – pronto. On this occasion it was for Boy; complete with 3/5 of the band on stage and a bit of a rarity seeing Ian Kenny with a guitar on stage – surprisingly all with deserving serenity despite those glaring screens in view.

More of the old stuff followed, drawing on Universes and the self-titled album because we had to hear (and sing) Plans before the night was through. Clearly the withdrawal from not seeing the birds live for some time was being adequately treated.

Of course Anchor made its way into the set but not as the finale, more tunes and an encore followed…so that we could all belt out Lanterns and This Fire.

And hopefully we get to do all of that again soon.