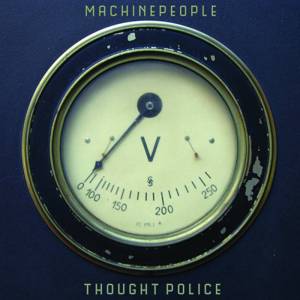 Despite its members originating from different parts of UK (namely Leeds, Manchester, Glasgow and London), the Brighton-based Machine People are a four piece alt rock band that started making music together in 2013. Gigging, writing and recording with a range of rock and electronic influences has resulted in an emotive, desert-scorched alt rock sound.

Thought Police, the band’s debut album was released last year. Without reading too much into song meanings, the album’s opening track Every Chance I Get is based on juxtaposed feelings which is probably the reason for the intensely driven and punchy alt rock sounds that become apparent early on in the piece, and nicely followed with a grittier raw sound on Big Fish.

Offering a reprieve of sorts, Winds Unfavourable offers a breather of sorts from the high energy rock, taking the opportunity to unveil vocals and lyrics more prominently before taking an acoustic turn for a sparser feel on Fake Numbers.

At any risk of nodding off, Sometimes offers a stormy charge in listening showcasing what Machine People seems to do best, only to be countered by a rock ballad of sorts under the unlikely title of Murder. But in seeking resolve, the album’s title track Thought Police is left to last in what seems to be a bit of a lingering contemplation on the state of existence.

WHERE TO FIND MACHINE PEOPLE: