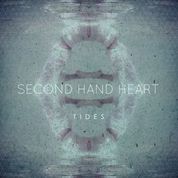 Since releasing their first EP back in 2011, Melbourne indie-pop five piece Second Hand Heart have gone from strength to strength, with the recent release of Damnesia from the band’s debut album, Tides.

If there was one word that attempted to adequately encapsulate the sound of Damnesia, it would be beautiful. It immediately swathes with moody yet simple piano with layers building throughout accompanying haunting, controlled vocals, hooking you in from the first listen.

But Damnesia is only the beginning, opening to a wealth of gorgeous reflective sounds on the band’s debut album, Tides. Promising an exploration of light and shade, cloudy landscapes and the colour that looms beyond, the album offers a truly enchanting listen.

A minimalist approach that builds in complexity in Spending My Time offers a contrast to the rather exquisite vocal arrangements in The River Ophelia and the delicacy of We Dream Awake.

Lions is a personal highlight, offering a more powerful tone with pace and momentum complimenting a fuller, richer sound.

There’s definitely a maturity and depth that may have been alluded to previously from Second Hand Heart, but it hasn’t featured as prominently as what can be heard on the album. Simply stunning listening.

WHERE TO FIND SECOND HAND HEART: