The only guarantee of the line up on this mammoth night was that Brody Dalle would kick things off at an uncharacteristically early start for a Friday evening. The rest was determined by chance and a coin toss to decide whether QOTSA or NIN would play first.

An extra raspy vocal in ‘Rat Race’ may have been attributed to an infection, but surrounded by a skilled band the sound was still great.

Evidently the most un-rock moment of the night was owned by Brody’s request to the crowd to help make her feel better by singing a song to her. Not just any song, but the Kookaburra Song. It may have been a while since some of us had done so, but we willingly obliged, unfortunately without getting to the unofficial electric wire verse (does that still exist?)

Murmurings began in anticipation to the sounds of drums, and everyone went crazy as soon as the guitar kicked in for ‘You Think I Ain’t Worth It’. Yep, QOTSA up first (gut feel of NIN up first was completely off-mark…) 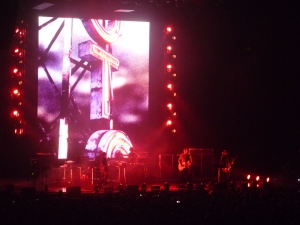 ‘No One Knows’ was pumped out second in the set – a surprisingly early appearance but mind blowing and soul stirring (I still want to see Dave Grohl smashing this out one day). There was plenty more where that came from too.

Things got just a little grittier with ‘My God Is The Sun’, adoring every moment of the thrashing beats and it got better with the crowd taking on the guitar in ‘Burn The Witch’, not to mention masterful and effortless vocals before the falsetto kicked in for ‘Smooth Sailing’ and the massive ‘Misfit Love’.

Homme became the piano man, just for a fleeting moment of balladry in ‘…Like Clockwork’. But sentimental moments didn’t linger for long, rocking out to ‘In My Head’ and ‘Little Sister’ packing an absolute punch. Kudos was well due and owed once ‘The Vampyre of Time and Memory’ arrived – flawless vocals with the added potency of a killer live sound adding another dimension to an incredible tune.

Undeniable swagger from Josh Homme, a towering giant and figurehead on stage with an unmovable air of cool. Apparently though it wasn’t about being cool – the word of Homme declared, “Don’t be cool, be f****** awesome.”

It wasn’t all about Homme though, jaw dropping mammoth solos in ‘Better Living Through Chemistry’ and astounding drumming from Jon Theodore in ‘A Song For The Dead’ was a colossal feat to deliver and witness on stage, certainly enough to stir a few souls. The impeccably timed pauses only teased to build for an epic finale.

Round two – the known but no less predictable NIN. There was no escaping the intensity and angst unleased when NIN hit the stage.

Rock was set aside while the electronic filtered through with ‘Copy of A’, swagger replaced with synth and beats. There was nothing but mind-boggling intensity – lights, sounds, and fury. Admiring and transfixed in a hypnotic state, every moment that unravelled was lapped up.

A little reprieve before ‘Survivalism’ quite literally exploded from the stage. I know people who would have cowered into a corner in tears by this point. Those of us present however just looked on in awe and wonderment.

But the rock returned, pumping through with imposing guitar screaming through on ‘March of the Pigs’.Then piano man version 2.0, this time with Trent Reznor at the helm of the keys in ‘The Frail’.

Lyrics were screamed, whispered, yelled but barely a word was spoken. The most in fact was shared by Renzor’s recount of ‘The Wretched’ written at a very dark and bleak time, only serving to lift the mood with a song about the end of the world in ‘The Warning’.

No one said this was going to be a motivational lecture but seas of heads on the floor and in the stands moved in a monotonous unison of approval as the night progressed. Apprehension and uncertainty around the new sounds didn’t seem to be on the radar either with the reaction to ‘Came Back Haunted’.

There was a lighter side however, well – as light as things could get with NIN – proven with Mariqueen Maandig on stage for a How to Destroy Angels feature (‘Ice Age’ and ‘BBB’). Not quite a cover, not quite a fourth addition to the line-up but definitely a welcomed inclusion, whatever it should be called.

A return to NIN and things ended with a little communal singing and the lingering sounds of ‘Hurt’ being promptly interrupted by the house lights.