The night of realisation arrived –  the gratefulness of another Johnny Marr show going on sale, and witnessing rock goodness for the first gig of 2014. The disparity in popularity at these festival sideshows vs the festival sets is still puzzling, but any of the crazy kids who didn’t bother showing up to the stage earlier enough at Falls or Southbound missed out on something special.

With fans eagerly staking their positions at the front of the stage from the early hours, Dean Whitby filled the void of the interlude. Performing solo for only the second time, the delivery from one fifth of Melbourne outfit Drunk Mums inevitably led to a more reserved performance, made up for with tales of debauchery. The autobiographical tale of ‘Pub on My Own’ kept things focused on all things drunk and after the catchy Made it or Not, Eventual Ghost was delivered to the eardrums of those present, even it was a little jaded from overplaying in the band.

Swagger and cool were clearly prerequisite criteria, with the band and Johnny Marr making their entrance for an impeccable evening of music. Launching straight into The Right Thing Right, The Messenger album was a key feature being brought to life on the night and transfixing a captive audience from the get go.

However, the classic sounds of The Smiths were not forgotten, with Stop Me if You Think You’ve Heard this One Before immediately following. I am not a devout fan by any stretch of imagination, but everyone from the uninitiated to the committed was encapsulated by those classic sounds, transported to another time and place even if physically present in Northcote. 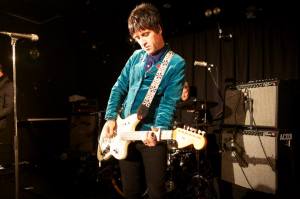 As those classic sounds infiltrated the newer material in the likes of Upstarts, cheeky winks embellished the already brazen The Crack Up, and the moodier broodings of Say Demesne. But Generate! Generate! signalled a change of pace and mood for the evening, adding to the already raised energy levels on stage and in the crowd and appropriately followed by the equated momentum of Bigmouth Strikes Again.

Ensuring that multiple career phases were represented, ‘Getting Away with It’ from the days of Electronic provided for yet another flashback moment. More inclusions from the days of The Smiths made their way into the set on the night, including the rolling rhythms of Panic, the encapsulating How Soon is Now and the emotion of Please, Please, Please Let Me Get What I Want. But nothing could surpass what could only be described as magical – the experience of witnessing There is a Light That Never Goes Out live, with the resounding sounds of the crowd willing and eager to share the moment, even taking over lead vocals for a chorus or two.

Crashes and collisions are not the cheeriest of topics, but the pleasure and privilege of witnessing such an epic and flawless performance in one evening was certainly ours, and one that will remain with all the guys, girls and darlings there on the night for a long time to come.