You know you’re going to get your socks rocked off when you walk into an already loud venue, but the communication between someone on stage and the sound guy at various points during the night consists of fingers pointing to the ceiling and gesturing to the sound guy in an upward direction. Willing to risk a decibel or two of hearing, the people came…

The Sinking Teeth got things started early on, rocking the stage with sounds tinted with punk, and even a little metal but undeniably energetic. The slightly less frantic Tongues was slotted in amongst tales of witnessing car crashes involving a gladiator, and spruiking the nearby Japanese consumed for dinner. But the sounds continued with the roadside-inspired Carcass before finishing up with Temporary Living. Particularly impressive was the proactive White Water EP sales post set…of course bought, and listened to on several occasions since the gig. It’s rather impressive.

Super Best Friends, Canberra, and short, punchy, politically edged punk. I knew I was missing something, and I didn’t join the dots for a while, it took a couple of songs including You Want It and The Bleachers before everything clicked with Round and Round. Sure enough, I’d heard this one before and so had a few other people after the political cameo filled video dissipating any last remaining shroud of credibility for the politicians ‘starring’ in it (hilarious stuff though!). Karma Karma wrapped things up nicely, even featuring a little bit of keyboard. 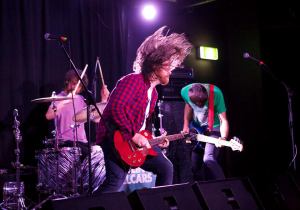 Sure, this was the single launch for Werewolves, but Calling All Cars crammed in the new tracks amongst the familiar. Run Away got a nice little singalong out of the crowd After being pulled up on pathetic contributions from the crowd during She’s Delirious, everyone was on unspoken warning to steer clear of lacklustre participation for the rest of the evening, delivery duly after the build into Hold Hold Fire. 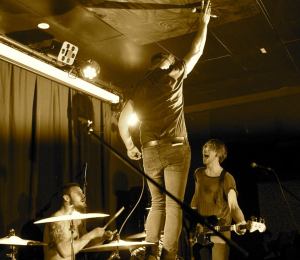 The venue became a jungle gym during Animal, and the crowd took over again for Not Like Anybody before the killer Raise the People. The new stuff is different and a little surprising but in that good ‘I need to listen again’ kind of way, and up against Reptile finishing off the night, it stands up live as well…very well in fact.

The ears have recovered…until next time.