Music has an incredibly innate energy and power – to heal, to inspire, to unite and undoubtedly reach into the depths of your being, right into your soul like nothing else can. Perhaps it was the mirage of warmth being created by the ember red lighting on stage, but walking in to see an already packed Forum and hearing the beautiful sounds of Nahko and Medicine for the People on stage made the world stop for just a second or two.

Nahko and Medicine for the People @ The Forum

After the incredibly heartfelt welcome from Nahko, the first words of Aloha Ke Akua, ‘Lend your ears, lend your eyes, lend your movement, anything you can’ captivated and charmed, with the music and energy met with resounding cheers. Either there were some incredibly dedicated fans in the crowd, or fast learners already singing along and engaging in a call and response in Black as Night. I can’t pinpoint anything that sounds like this – at various times there were notes or phrases that made me think of the likes of John Butler, Dave Matthews, Michael Franti, G.Love, and of course Xavier Rudd (even Spotify hasn’t listed ‘related artists’ LOL). An incredibly fitting support that could have easily been the main act for the night.

If that was too much to take in, the easy, unhurried sounds of Donavon Frankenreiter’s Free soon spread through the room, along with the very cruisy and jammy What’cha Know About and That’s Too Bad (Byron Jam). Note that if you’re ever close enough to the stage watching Donavon and you have a song request, only shout it out if you’re prepared for the chance to get up on stage and sing along. It happened – twice – first, for Life, Love and Laughter and then when Donavon went looking for someone in the crowd to help with It Don’t Matter. Perhaps a worst nightmare for some, but lots of fun to watch! 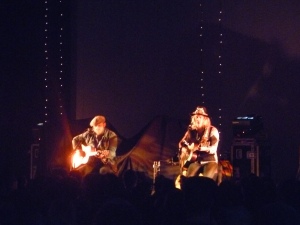 I’ve only seen Xavier Rudd live once, supporting Dave Matthews Band back in 2007 but remember being amazed at the one-man band set up so I expected good things. Bow Dow was spellbounding during the bare verses and stirring in the drum driven choruses, without overshadowing the beauty of Messages seamlessly transitioning into the spellbinding Guku. 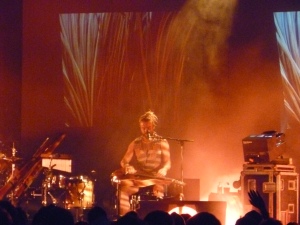 I clearly wasn’t the only one waiting to hear Follow the Sun, evident with all the dancing and singing along that was taking place and after a smooth cover of Bill Wither’s ‘Ain’t No Sunshine’, Xavier took position behind that all-familiar one-man band set up for Lioness Eye, magic to watch and hear. Slowing things down a little for Come Let Go exuded even more energy with the ensemble of crowd singing that accompanied and obviously prepared everyone to take over vocals on Let Me Be after the roots driven sounds of Food in the Belly and The Letter.

There was nothing but pure energy from the stage during the encore, with Nahko and Donavon returning to the stage for an awesome cover of Bob Marley’s ‘Buffalo Soldier’ and ending the night on Footprint. An absolutely incredible live experience. 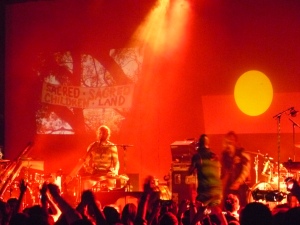 Xavier, Nahko and Donavon @ The Forum