Think about everything that comes to mind when you think of a violinist – go right to the depths of the stereotypes you envisage,  and then reverse it. You’ll come pretty close to getting a picture of Lindsey Stirling.

Don’t get me wrong, there’s nothing wrong with the typical violinist, and I’m more than happy to be chilling out listening to a little Vivaldi every now and again. But we’re talking about something far more atypical when it comes to Lindsey Stirling, and it’s a refreshing change of pace.

A relatively recent discovery, I was clearly instructed to watch rather than just listen to Lindsey so headed to YouTube and quickly worked out why.  Yes, Lindsey is a violinist but there’s an entire performance with choreography that goes behind every piece – the cover of Imagine Dragon’s Radioactive with Pentatonix is still my absolute favourite. I’ve heard it referred to as dubstep violin, hip hop violin – call it what you will but it sounds good. 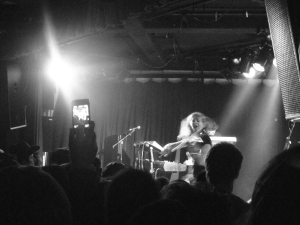 So last Tuesday it was time to see what a live Lindsey Stirling performance had to offer for a sold out crowd at the Corner. Battling through the heads of tall people and smart phone screens blocking my view, I caught a glimpse of Lindsey appearing on stage but it wasn’t long before she launched into Anti Gravity, complete with choreography. Easier to stick to watching the video screens tonight!

Several original pieces followed, including Stars Align, and Electric Daisy Violin to the joy of the crowd. If anyone wasn’t convinced by this point, the lyrical Shadows showcased the effortless and virtuoso skills as a performer as well as composer with The Song of the Caged Bird, inspired by the Maya Angelou poem, I Know Why the Caged Bird Sings.

Covers were incorporated into the set during the course of the night including a medley paying homage to one of Lindsey’s favourite artists, Michael Jackson and Flo Rider’s ‘Good Feeling’ continuing to demonstrate the remarkable talent and diversity of these seemingly effortless performances.

After finishing with the very impressive Phantom of the Opera medley, (Andrew Lloyd Webber, eat your heart out!) Lindsey treated the crowd to an encore covering Evanescence’s My Immortal (stunning!) before picking up the pace for a triumphant finish with another original, Crystalise.

At times it was difficult to know where to focus, with the performances being a combination of music, movement and dance. it can be a little distracting at times with so much to take in but as much as it can distract, it’s seriously impressive and deserves kudos. Next time I’ll just have to get to the venue earlier and stake out a position with clear views of the stage to avoid all the phone screens and heads.

Check out performances from Melbourne, and Sydney…