Given the impending darkness surrounding the future of the Palace Theatre, there’s a greater sense of revelry surrounding the place at the moment when it comes to gigs, pinged with a hint of sadness. But with three acts on a Friday night, who wasn’t going to be excited?

Before the main event, the night was a shout out to all things good from Melbourne. Performing to a hometown crowd, Vance Joy impressed a growing crowd with impeccably rich and soaring vocals, opening with the tender Emmylou and showcasing the beautiful storytelling lyrics of From Afar.

A cover of Bruce Springsteen’s Dancing in the Dark was impressive….jaw-dropping impressive and by the overly attentive crowd hovering close to the stage it seemed everyone was blown away. Bruce might be ‘The Boss’, but Vance showed he was a willing and able apprentice. If that wasn’t enough to win us over, it was soon ukulele time for Play with Fire and the crowd favourite, Riptide. I now understand why all of Vance’s upcoming Melbourne shows are sold out (three, to be precise!)

Easing in with the solo keys of Invest, it took a little while for some to realise that Big Scary had made their way to the stage. Having last seen the duo of Tom Iansek and Jo Syme at Groovin The Moo last year, this was a perfect opportunity to hear some of the newer sounds from their latest album ‘Not Art’.

Luck Now was a stand out, being hooked by the beat and the vocal alongside the murkier but captivating Phil Collins, but not before Tom Iansek sang the praises of the Palace, bringing to the forefront what could be the fate of the venue’s future. Hearing Why Hip Hop Sucks in ’13 was a strange experience live, as the band playing along to a backing track there was a sense of anticipation of something about to happen or some live vocals coming in, but it didn’t really go anywhere.

Vacations was not entirely forgotten on the night, with the brighter and cheerier sounds of Mix Tape, Falling Away and Gladiator rounding out the set. Some of the loudest cheers may have been from family members at the back of the venue, but with the mutterings of “I really liked that” that I heard behind me, I think some of the crowd may have been won over too.

It seemed that easing into things was the way of the night, with Bernard Fanning opening with the gorgeous Hope and Validation before launching into Battleships, the first single from his second solo album Departures. This was the Bernard Fanning of old, and in front of his band it was almost as though nothing had changed from the days of Powderfinger, acting as the consummate frontman. With the laughter and between band banter on stage, everyone was ready for a good time. Following the uptempo Inside Track and wisdom of life told in Limbo Stick, it was storytelling time from the days of Powderfinger supporting You Am I and Bernard’s experience of walking into a parking meter. As entertaining as the story was, the focus quickly returned to the music. 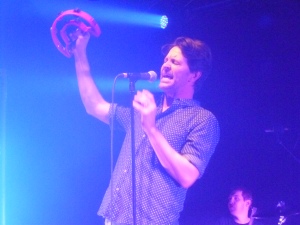 You realise that you’re far too attached to a song when you’re already able to name it within a second or two of a guitar strumming the all familiar chords. Despite the extended and slightly altered intro, it was time for Thrill is Gone, the unmistakably catchy opening track from Tea & Sympathy. The joys continued with John Bedggood joining the band on violin for Songbird before the crowd was asked to quieten down for Departures (Blue Toowong Skies) which was almost as heart wrenching as expected. It was only ruined by the trepidation that the feral group in the crowd near us would behave inappropriately during it.

The set may have ended with an extended version of Here Comes The Sadist but quickly returned to the days of Tea & Sympathy for the encore with ‘What A Fool I’ve Been’ that didn’t make it to the album and Wish You Well. That would have been a perfectly fitting end to the night, given that I’d been completely swept up in the rest of the set and had almost forgotten about Wish You Well, but the band continued on for a cover of George Harrison’s ‘What is Life’.

For a moment I was almost convinced that I needed to make my way to the Yarra Valley later in the year to see Bernard Fanning again at A Day on the Green. Upon hearing a comment from one of the members of that feral group about going, I promptly changed my mind.  Shame really, but I’ll appreciate the good crowds next time!