Mammals could be a band, but it’s one guy with a band. Confused? Don’t overthink it, and warm to the sounds of Guy Brown and his band. Despite being the first performance to a seated crowd, it wasn’t the most uptempo support act but very cool indeed, moving rather seamlessly between a little crowd banter and tracks blending electronic indie roots sounds with smooth vocals. Escaping the cold of the evening, the venue quickly filled during the set as Mammals showcasing a diverse mix of sounds. I’m keeping my eye on this one….check out Move Slower and Carried. 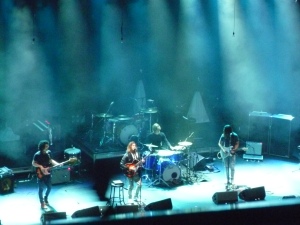 Suitably warmed, it was time to prepare for the main act, performing to a sold out crowd at the Palais. Shrouded by a sheer veil of white, Of Monsters and Men appeared as mere silhouettes on stage to the sounds of Dirty Paws before the curtain fell after the first verse to one of the loudest audiences I’ve heard.

It takes something special to take a piano accordion from mediocre and reminiscent of all the European folk polkas I heard as a child to something special but thanks to the six Icelandic musicians responsible for the night’s entertainment, three of whom actually played the instrument (including the drummer), Of Monsters and Men did just that. This wasn’t a night to play cool or shy away from participation with everything from hand clapping to every non-verbal sing along phrase you could possibly imagine starting with “la la la” in Dirty Paws, more “la la la” and “hey hey” chants complete with choreographed foot stomping from the band in From Finner and “whoa-ohs” in amongst the clapping central of Slow and Steady.

The simplicity of opening Your Bones with Raggi (Ragnar Þórhallsson) on stage under a spotlight captivated all and heighten the crescendo of the chorus (with more of those sing-along phrases). This was close to the highlight of the night, until Six Weeks where Arnar (Rósenkranz Hilmarsson, on drums), with his foot blasting at a bass drum and drumsticks in the air had the crowd in an almost stomp-like clap for an extended intro. 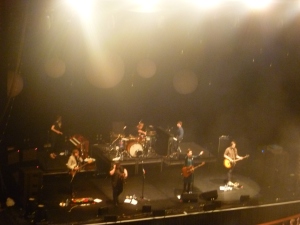 Of Monsters and Men @ The Palais (3 Aug)

Given the upbeat and happy mood of the night, ending on Yellow Light seemed a strange choice. Although the last track on the album, it seemed to bring down the mood and for a few moments it was actually more interesting to watch the ‘snow’ falling on stage from one of the broken shoots on stage, clumping into massive chunks of cotton wool. The excitement of Lakehouse would have been better saved for the finale, especially with all the smiles and wonderment  from the streams of silver confetti launched over the crowd which may have had us all singing our way back outside, into the freezing Melbourne night. Regardless, you couldn’t help but be charmed by Of Monsters and Men and their joyous folkie pop ways.