Saturday night brought with it the long-awaited EP launch from Them Swoops, but it was also the reminder of the surprise packages that come with seeing support acts. So having seen Them Swoops twice already this year as a support (for Birds of Tokyo back in February, and for Hungry Kids of Hungary back in April), it was finally time to see them as the headlining act.

Hiding with Bears got things started for the evening, sharing tracks from their EP and some new material too. There’s definitely a little bit of a Tame Impala vibe, a bit of Grizzly Bear in the sound, and I couldn’t help but be reminded ever so slightly of Whitley too. It was a pretty chilled start to the evening, but by no means gloomy with layers of percussion and harmonies.  I walked away from the gig with an EP in hand, and it has received multiple plays throughout the week. The title track, ‘Watchmen’ is a standout, but ‘For the Foolish’ is a close second.

Things got a little more rock when The Greasers made their way on stage. They had a couple of really catchy tracks but at times things were just a little perplexing. If you’re prepared for genre boundaries to be somewhat non existent when listening or watching these guys, you’re in for fun times!  Before long you’ve returned to a youth you recall with grungier bass lines, and then ‘Shelly’ takes you back a few decades with fun, simple melodic pop rock, but then blink an eye and you’ve been transported to Jamaica with a cool little rock reggae number before winding down with a couple of more mellow tracks.

The Glimmers EP was obviously the key theme of the night, and Them Swoops showcased the EP tracks as expected to rousing reception. This is probably the best I’ve heard Them Swoops live, and what better night for that to happen. The fan of the night award had to go to Aunty Julie, taking prime position at the front of the stage for a little boogie. Bless!Beyond ‘Too Fast for Love’, ‘Rollerskate’ and ‘Work around It’, the band delivered a set that was evident of a bigger and better things to come, with the expected level of happy vibes from upbeat, catchy pop tunes.  Thankfully the live shows account for the fact that there is only an EP available at the moment to keep the fun times rolling long after everyone’s gone home. The EP has been getting a fair amount of play at home this week, perhaps with ‘Rollerskate’ on repeat a few times…but who’s counting? 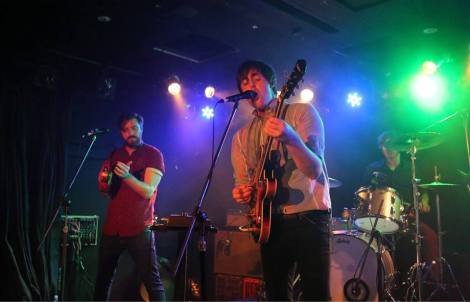 So the verdict? Support the support acts. Sure, we’ve all come across the less than impressive support acts in our times (you know the ones, too wasted to know whether they’re Arthur or Martha on stage before the party has started, those who seem as though they’ve literally just rolled out of bed and landed on stage, etc, etc, etc) but they do tend to be the exception.

I don’t have enough fingers and toes to count the number of bands and artists I listen to that I’ve discovered in a half filled venue, performing for a less than interested crowd with the exception of a few interested listeners.If this isn’t a part of your regular gig routine, give it a shot – challenge your ears, battle with your friends to get to a venue early and see what that “Plus Special Guests” line up on your ticket might deliver. It could be like Santa visiting all year around, minus the sleigh and reindeer.