Seeing Mundy live has been a long time coming….a long time. A friend had returned from England years ago and in catching up about all the usual travel stories, the conversation naturally turned to music and I was handed Mundy’s 24 Star Hotel album with some trepidation and comments along the lines of “I’m not sure if you’ll like this, but….”

So I took it home for a listen, and loved it. So much so that I got my hands on my own copy ASAP ensuring I could play ‘July’ on repeat, along with every other Mundy album I could get my hands on at the time (thank you interwebs!). I missed seeing Mundy live on several tours, so I couldn’t pass up on the opportunity this year. Fun fact – one of the tracks on the Romeo + Juliet Soundtrack was by Mundy (‘To You I Bestow’), which I obviously chose to ignore all those years beforehand when friends insisted on playing the soundtrack at every opportunity. Regrettably, I probably should have paid more attention back then 😉

Looking at the line up, there was really no surprise that I was potentially in for a bit of an Irish ex-pat gathering (and being one of the only non-Irish people in the room) but any potential misjudgments about what I was about to hear that night were quickly negated when I walked in to hear Gallie on stage with a folk and stronger roots/ blues edge that doesn’t come across as prominently in any of the existing recorded tracks I’ve heard. Certainly no complaints, and absolutely loved ‘One Fine Day’ 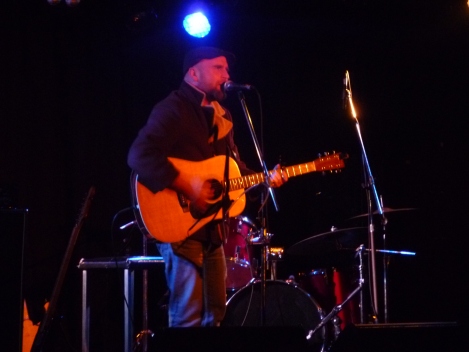 As soon as Mick McHugh strummed the first few chords, all I could think of was being back in school learning about the First Fleet arriving in Australia. Aptly so, given that ‘A Long Way From Home’ was about leaving everything behind in Ireland and coming to…you guessed it, Australia. All those school day memories were quickly put aside, but there was no mistaking the lyrical Irish storytelling spanning sombre notes in ‘Lie to Me’ all the way to the joy of ‘Let’s Dance’ written after a trip to IGA, proving inspiration can come from just about anywhere. I’m sure someone broke out into a little Irish jig somewhere in that room.

For something a little closer to home, Melbourne’s Blackchords took the stage as a three-piece, without drummer and while being concerned about sounding a little bogan, this was nothing but fine live Aussie music. While in a more raw form than what you hear recorded (to the point of a slight hint of a Something for Kate vibe), Dance, Dance, Dance is a personal favourite – coincidentally or otherwise a bit of a recurring theme for the evening, but equally impressive was ‘As Night Falls’ along with ‘Day I Die’ – not as melancholy as you might anticipate from the title.

Then, finally – Mundy time 🙂 Treating the crowd to a solo ‘Mayday’ before bringing the band on stage (including Tristan Courtney from Blackchords, and Mark Stanley on drums who co-produced Blackchords’ second album, A Thin Line) . Dealing with requests being left, right and centre from the crowd didn’t deter from the set highlighting the different sounds across each of the albums. Similarly, you couldn’t say no to requests for participation in singing along with ‘Tenerife’ and ‘By Her Side’, to which everyone willingly obliged regardless of vocal ability.

Then the moment I’d been waiting for – I got to hear ‘July’…complete with crowd clap-alongs and singalongs – perhaps everyone else was just as happy to hear it?! It could have easily been the highlight of the night, until everyone practically raised the roof for ‘Galway Girl’ complete with a guest violinist who joined the band for the final songs of the evening. The encore of ‘Gin & Tonic Sky’ was almost a little bit of a wind down to the end of the party rather than the triumphant ending but it’s probably exactly what was needed after the hours of fun on a weeknight.