Having got to the Palace just in time, I managed to catch  Jamie Hay, a Melbourne based singer songwriter who treated the audience to a delightful re-gifting of a song he wrote as a birthday present and a couple of other tracks in what was a very short opening set. However, glad to have been part of the full house to hear it. 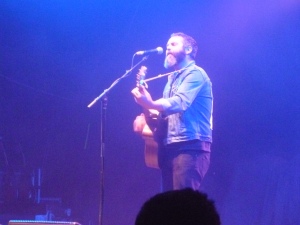 I had greatly misjudged the response from the crowd for Dave Hause, but playing to a packed Palace was proof of this with all the audience singing and clapping along with ‘Jane’, which continued through ‘Time will Tell’, ‘Prague’ and the remainder of the set featuring tracks from the most recent album, ‘Resolutions’. Apparently we also did a better job at singing along to ‘The Shine’ than the previous night’s crowd.  In all seriousness, an awesome set and so good to hear some of Dave’s tracks live.

Also credit to Dave for a few jokes at the expense of the crowd (a couple of guys spotting Alex Rosamilia from the Gaslight Anthem watching in the wings, and of course the ‘lovely’ ladies (aka bogans) drawing attention to themselves…) 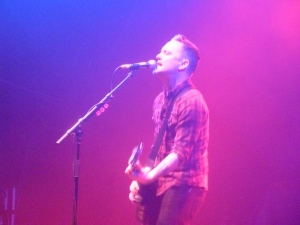 But the loudest singalongs and cheers were definitely reserved for The Gaslight Anthem, opening with ‘Handwritten’ and limiting the between song banter to keep the music coming with a set heavily weighted to tracks from ‘Handwritten’ and ‘The 59 Sound’. Having sold out the Wednesday show and announcing a second night at the Palace should have been enough of a clue that there was a huge night ahead but the following these guys have really becomes apparent at the live shows. They’re a really solid rock act – not exactly setting the world on fire with revolutionary lyrics or arrangements, but it’s not always about that. Sometimes it’s simply enough to hear some great rock that everyone enjoys and can feel good about, and the night was evident of this.

Highlight of the evening had to be hearing 45″ (my fave track) with ‘guest’ vocals from Dave Hause. 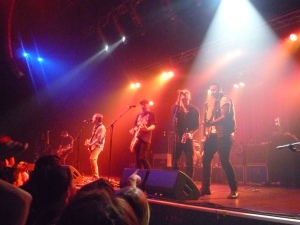 The Gaslight Anthem and Dave Hause @ The Palace

And some footage from the previous night’s show