So it’s time for some serious blog catch up….oops. But only a week and a bit behind on gigs…

After the unexpected (but very welcomed) addition of Aerosmith to the Stone Music Festival line up back in April, it was time to revel in the spectacular of the toxic twins again while checking out Aerosmith back in Melbourne.

Having missed Kingswood (again…grrr!), the night kicked off with The Dead Daisies. Perhaps an unfamiliar name, but not an unfamiliar line up with Jon Stevens (think Noiseworks) heading a pretty spectacular group of musos. It’s just no nonsense, hard hitting rock… really can’t go wrong with that. To date, I’d only come across ‘Lock n Load’, the current single featuring Slash (yes, Slash…) so it was good to hear some of the tracks from the upcoming album (‘Writing on the Wall’ is a personal fave), with the set finishing up on a high with a cover of the Beatles ‘Helter Skelter’, no complaints there! 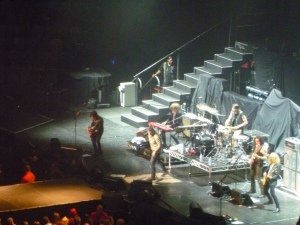 Then after waiting, and waiting…the toxic twins arrived on stage and the real party started. Seriously, these guys are great live…energy, fun and good music is always a good combination. After opening with ‘Draw the Line’, things really kicked off with ‘Love in an Elevator’  and didn’t slow down at ‘Jaded’ either with mass crowd singalongs. 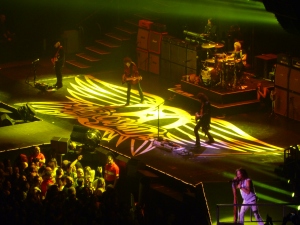 The big surprise of the night for me was ‘Janie’s Got a Gun’ included in the set this time (the reason why it’s ok to see bands multiple times on their tours), which almost made up for the fact that the big white grand piano didn’t come out with smoke machines blazing for ‘I Don’t Want to Miss a Thing”. Don’t worry though, all was resolved during the encore when the grand arrived on stage, complete with a mini stair case with glow in the dark edging (much cooler than my two-step stool from Ikea – jealous!) for ‘Dream On’ and ‘Sweet Emotion’. 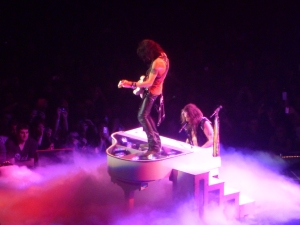 Then insert bursts of confetti to officially end the night – over? Already? Yep, that’s it for another night…fun, fun times 🙂